In 1781, General Bernardo de Gálvez sailed into Pensacola Bay to deliver West Florida from the British. Now, 235 years later, Pensacola Heritage Foundation is working to preserve the memory of Gálvez and his importance in aiding the colonists during the American Revolution.

Pensacola Heritage Foundation, the oldest historic preservation group in Pensacola, celebrated its 50th anniversary in 2014. At that time, the organization agreed to partner with the City of Pensacola in a series of monuments, gardens, recognitions and presentations that would feature their common mission of heritage support for the Pensacola area.

Because of a renewed interest in Gálvez and the part he played in Pensacola’s and Florida’s history, the Foundation decided its first project would be to honor this great Spaniard.

Happy Gálvez Day! We dedicated our beautiful monument this morning, but the site work will continue for a few more weeks, so you still have a chance to add your name to the plaza. Enjoy this video about the history and process behind the monument, and make your tax-deductible donation at GalvezMonument.com.

Posted by Pensacola Heritage Foundation on Tuesday, May 8, 2018

The Siege of Pensacola

On March 18, 1781, Gálvez led the naval charge into the well-defended Pensacola Bay, a feat of daring that would earn him a royal patent adding the words “Yo Solo” (“I alone”) to his coat-of-arms.

His forces landed near Bayou Chico and began a steady advance towards the city’s defenses, which included Fort George on Gage Hill (Palafox Street) and its two advance redoubts. After weeks of siege, a Spanish mortar detonated the powder magazine at the Queen’s Redoubt on May 8, devastating the British fortification. Gálvez accepted the surrender of British Governor John Campbell and claimed West Florida for Spain.

By taking Pensacola, Gálvez stripped Britain of a key foothold on the Gulf Coast, which in turn benefited the American Colonists in their quest for independence. For this reason, Gálvez has been recognized by Congress as a hero of the Revolutionary War who risked his life for the freedom of the United States people and provided supplies, intelligence, and strong military support to the war effort.

A Monument befitting a Great Street 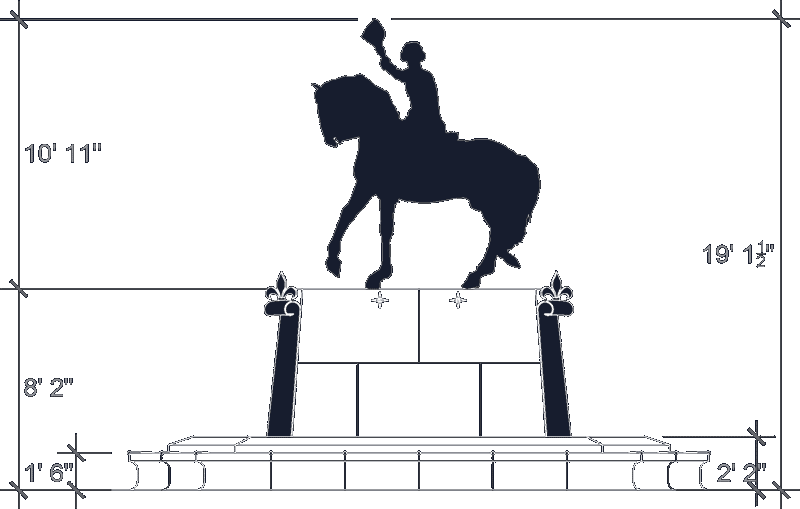 The Gálvez monument is located at the intersection of Palafox and Wright Streets. In 2013, Palafox was named one of America’s Great Streets by the American Planning Association.

Created by sculptors Bob Rasmussen and Kathryn R. Vincze, the monument includes a bronze statue of Gálvez astride his horse and facing the site of Fort George, his hat raised in victory. The statue sits atop a plinth of limestone featuring the Gálvez coat-of-arms cast in bronze. Around the plinth is a limestone bench surrounded by a perimeter of red roses representing the Spanish soldiers who died in the campaign. 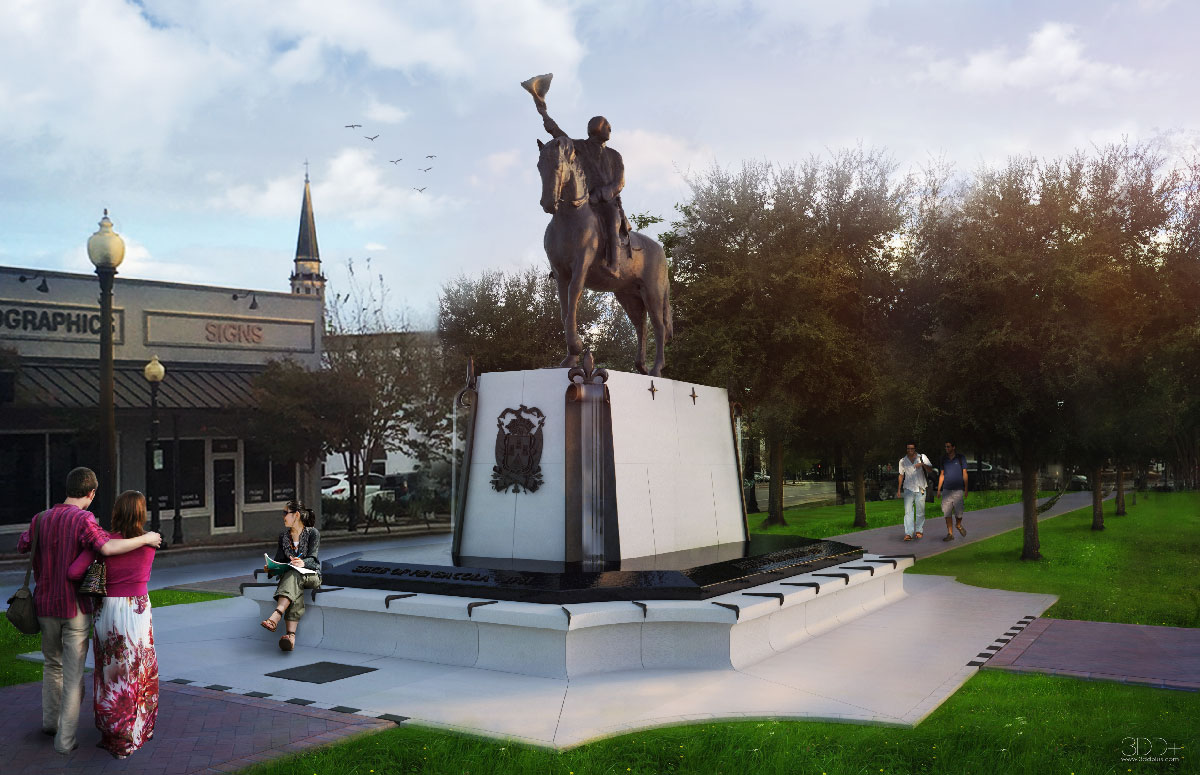 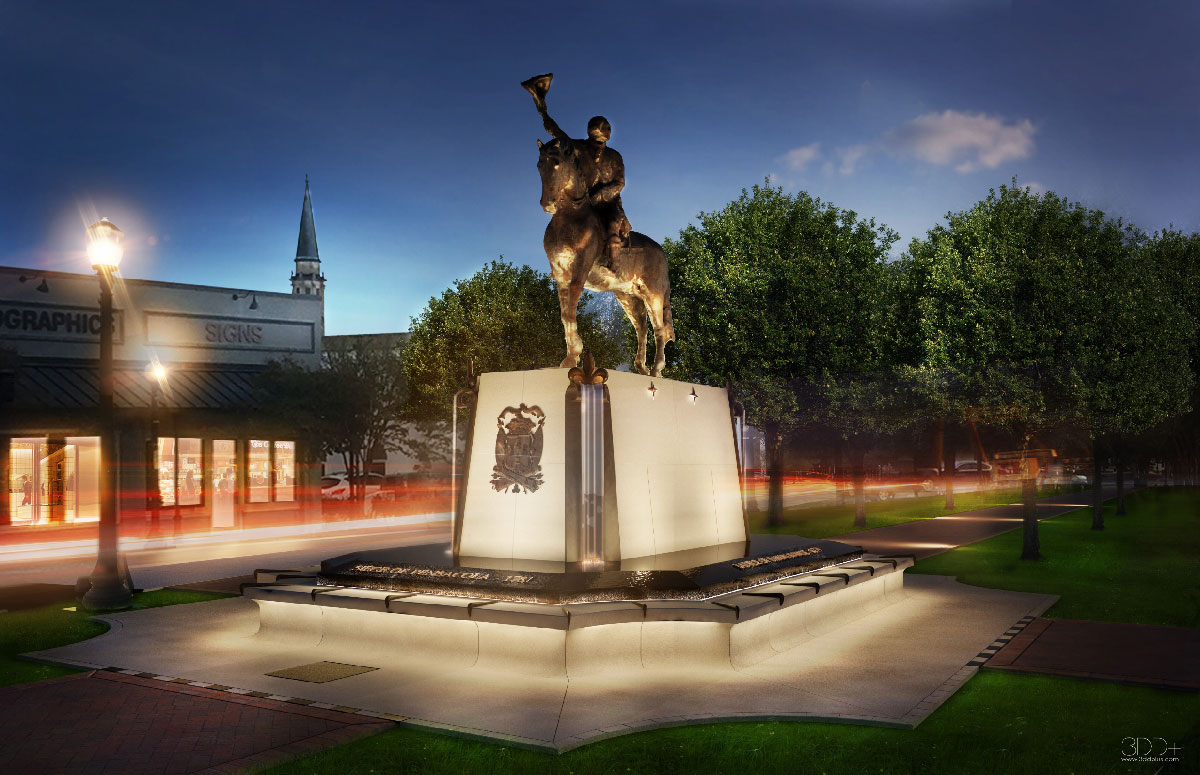 We could not build the monument without help from the community. The total budget for the Gálvez monument is $400,000, which is very inexpensive compared to similar monuments in other cities. We dedicated the monument on Gálvez Day (May 8), 2018.

For as little as $100, you can add your name to the plaza of this grand monument. On-site donor recognition is available for all donor levels, size commensurate with contribution. Viceroy level donors also received a bronze maquette of the Gálvez statue.

Send your tax-deductible donation to: